Welcome to the Air Heritage Museum on the grounds of the Beaver County Municipal Airport in Beaver Falls, PA. Let’s be honest. This isn’t the kind of place you go to see unique experimental psycho-planes, like the National Airforce Museum in Ohio or the Smithsonian Air & Space Museum in Washington DC. better than what Air Heritage staff do every day.

The museum facility consists of a, count, a main hangar with a few thousand square feet of tarmac in the front that leads to the airport runway. Those who saw our visit to the tiny American Airpower Museum a few weeks ago know that size isn’t all that matters in these cases. It all depends on what you can manage to fit inside. Museum staff may have up to three to four full-size warbirds on display in and around the main hangar at one time.

What the museum lacks in quantity is made up with a shovel by the quality of what they manage to slip into it. The museum has its origins as a research and historical preservation company. It was sort of a non-sexist gentlemen’s club. A place where people could gather and express their passion for old American warplanes. Over the past 35 years, many of the museum’s staff were once airmen or some other form of Air Force personnel. Others even helped make the planes themselves. Past exhibits include B-17 and B-25 bombers and a mid-engined Bell P-39 Aerocobra.

It all started in earnest in April 1986. The first addition to the collection was a skinny L-21B, the militarized version of the humble Piper Super Cub. Not exactly a jet fighter, but the cornerstone of a facility where jet fighters would one day be on display. The F-15A Eagle and F-4 Phantom II parked off the runway were still in full military service when the museum opened its hangar doors, as were the plethora of Bell UH-1 Huey helicopters now. disaffected. Everyone is now enjoying their retirement watching nervous student pilots take off in their Cessnas within sight of the museum.

The stars of the show split their time in the hangar itself. A virgin North American T-6 Texan trainer from World War II is staying more permanent. The very last Fairchild C-123K Provider heavy transport aircraft to fly on the planet is sharing the time inside the remaining space. Such a neat find deserves a showcase in its own right. Check back soon for this! For now, let’s focus on the third plane of this old-fashioned trio. A certified Douglas C-47B Skytrain beautifully lovingly christened Luck of the Irish.

It is not a cheap replica. Luck of the Irish legitimately robbed combat personnel during the decisive Battle of the Bulge. The battle is said to be the German army’s last major offensive of WWII. It also towed Waco assault gliders into combat while dropping troops during Operation Varsity.

Hundreds of thousands of donations and thousands of hours of work have restored the disused Skytrain into a machine that can rightfully recoup that money from air shows. The plane flies fairly regularly and must be maintained as such. Ultra thick 140 oil regularly escapes from twin Pratt & Whitney R-1930 radial engines which help the aircraft to navigate at approximately 160 miles per hour (257 km / h) at altitudes of 20,000 feet (6,096 meters).

Get there early enough, and you might even see staff diagnosing and fixing a problem with too much oil build-up in the lowest cylinder. A few candles, some elbow grease and a few muffled curses set things right for the plane’s last cold start before winter. The manually opening hangar doors opened on that brilliant fall afternoon like the parting of a holy sea the size of an airplane. In no time, the team’s trusty pneumatic tugboat managed to haul the great beast onto the tarmac in minutes.

A whole team was on hand to make sure everything was going well. Including an engineer in the pilot’s seat, a ‘firewall’, who was just a man with a fire extinguisher, and another person to carry a ‘starter cart’ that plugs directly into the main battery of the C-47. This extra boost gives the heavy twin-engine aircraft enough cranking amps to come to life as if it were again in 1945.

It’s hard to convey the kind of noise a pair of these 1,200-horsepower 14-cylinder monsters pulling to life sound like, except perhaps like the pits of hell opening. All to the sound of thousands of two-stroke golf carts rising from its depths. Be careful not to get too close to the plane at almost full throttle. The sheer force of the air behind them is justifiably enough to knock you off your feet.

Even so, it was a great thrill to see a real piece of WWII history come to life with the same vigor as during the war. Even though the oil pooling issue, which is not fully resolved, covered the ground with thick aviation oil when the test was carried out. A total of $ 100 worth of aviation fuel and some store towels. Check back for more of our visit here on self-evolution. 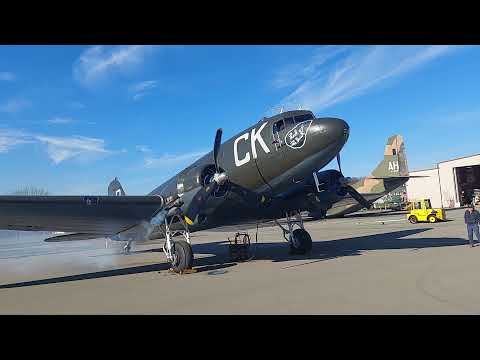 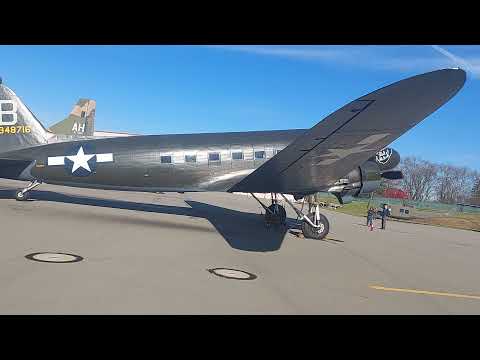